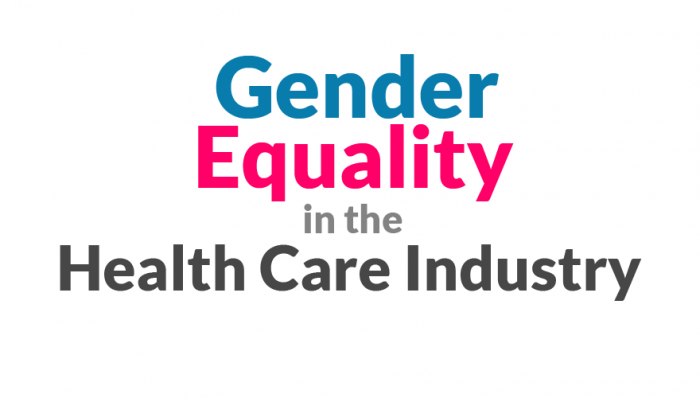 Gender equality is becoming one of the most important objectives and talking points in any industry. Serious questions are being raised about role diversity, wage equality, and more.

The healthcare industry is no different. With the massive demand over the next decade for qualified professionals, more individuals are interested in pursuing a career in the health care industry and want a better understanding of where the industry stands when it comes to opportunity and gender equality.

We at HospitalCareers believe in providing job seekers and healthcare professionals with the tools they need to make informed career choices, learn more about their future healthcare career, and understand where opportunities to improve the industry might be. We've gathered some of the most comprehensive reports and resources to create an industry report and infographic on gender equality in the healthcare industry. The infographic below highlights all of the important information that we cover below as well, so feel free to share it with a link to this report where users can find more information about the individual sections.

One of the biggest things that separate and differentiates the health care industry from other industries is the gender composition of the workers. The healthcare industry is comprised of roughly 76% female professionals, and 24% male professionals. This is one of the most lopsided gender compositions in any working industry, as few industries see such a lopsided composition of one gender being significantly larger than the other in the workplace.

The next part of this comprehensive gender equality report in the healthcare industry relates to how organizations are structured and their decision ladders by gender composition. Increasingly, across every single sector in the workforce there has been a massive push to ensure there is more gender diversity in the decision-making process. Unfortunately, This is one of the most lopsided reports and charts we have to showcase in this report because the numbers and gender diversity are so wide-spread across the metrics for organization ladder composition.

The health care industry, as we've stated earlier, is largely comprised of female professionals. Logic would dictate that females would make up a majority of the leadership positions in the industry, and that's what we're seeing today. Women make up the largest portions of decision makers and positions in the organizational ladder, except for the C-Suite and Executive roles where men outpace women and hold a stronger position.

As the healthcare industry continually expands to meet upcoming demand, health care professionals who have prior experience are increasingly put in new scenarios which offer them plenty of opportunities to advance the organizational ladder. It's possible that gender diversity in the organizational ladder across the industry is a reflection of the gender composition across the industry.

According to Advisory, the healthcare industry organizational ladder roughly consists of the following:

Of the health care companies in the Fortune 500, only one healthcare organization has a female CEO, the other 39 are male. The Fortune 500 in its entirety has more female CEO representation, as there are a total of 25 female CEOs compared to 475 male CEOs.

As we've covered in a previous section of this comprehensive report, the healthcare industry is largely dominated by male CEOs. We took the time to review Glassdoor CEO approval ratings of the Fortune 500 to evaluate where the averages are for each gender. Unfortunately, this stat is slightly skewed because of the Fortune 500 only having one female CEO, therefore the average is just one number in the data set.

One question that really stood out from the study was what role geographic location might play as a potential career barrier. The alarming thing is that both the south and southwest felt their geographic location plays a significant role in their career progression. 36% of southwest survey respondents felt that geography acted as a barrier in their career advancement, followed by the south respondents at 31%, and then 23% and 18% for the midwest and northeast respondents respectively.

How respondents of the RockHealth survey answered is below:

Another alarming finding from another fantastic RockHealth survey found that a majority of women believe that it will take a substantial amount of time before the healthcare industry has gender parity in the workplace. The second largest response from the survey respondents stated that they felt it would take 10 years, and then 16% responded that they felt it would never happen.

It's quite alarming that such a sizable portion believe that gender parity and equality might never happen in the healthcare industry.

How respondents of the RockHealth survey answered is below:

Salary and Pay Gap In The Health care Industry

Across the board, men and women who work in the healthcare industry earn significantly more than those who work in other industries. Overall, this trend is highlighted in nearly every career stage as well: entry-level, mid-level, and senior-level roles. Although men and women in the healthcare industry do tend to earn more than their peers in separate industries, the salary gap between them is still much larger — which would indicate that there is still room to go in closing the salary disparity.

The estimated employment numbers were gathered from both the Bureau of Labor Statistics census and DataUSA.

Another indication of gender equality in the health care industry is often related to the level of education that workers possess. Unfortunately, tracking the level of education diversity in the healthcare industry is difficult, but thanks to the census by the Bureau of Labor Statistics, we do have the education levels and education obtainment estimates for the United State population. This infographic and report was done in thousands, so 35,094 would mean 35,094,000 as an example. In the table below, we made it slightly easier and translated it to millions so you wouldn't have to do any extra math.

Women across the country are pursuing and obtaining education more than men in nearly every education level or graduation sub-section except for high school graduation, professional degrees, or doctoral degrees. This means that women are outpacing men when it comes to six out of nine education obtainment levels.

The educational obtainment below is how both genders stacked up: