The Nursing Shortage & How Baby Boomers Have an Impact 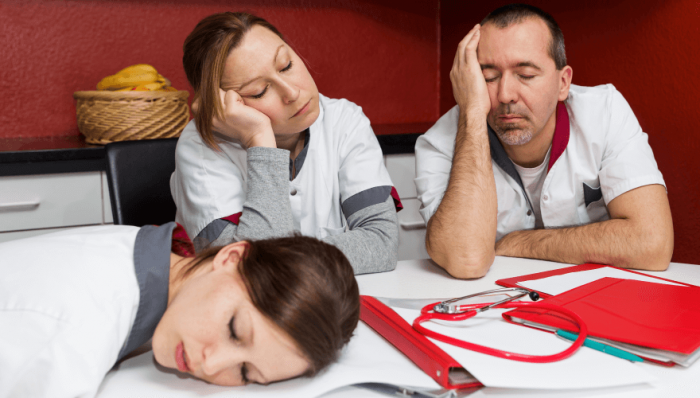 By now, most in the healthcare industry are aware that the U.S. is currently experiencing a nursing shortage due to explosive demand in the field, but what does that mean?

As more Baby Boomers transition into retirement, and more people are inducted into the system, the demand for nurses will continually climb.

It seems counter-intuitive that we have a nursing shortage as the Bureau of Labor Statistics projects that the occupation will grow by 16% and have about 440,000 jobs open up. There may be growth, but the demand drastically outweighs the supply in this case.

Behind the scenes are the compounding problems of lower enrollment at nursing schools than what the surplus demand calls for; a shortage in faculty at those schools; a disparity between healthcare professionals and patients; and a strain that the disparity causes, which leads to burnout and high turnover rates in the field.

Is the Nursing Shortage Real?

Some are still uncertain whether the nursing shortage predicted by many healthcare industry observers is actually here, on the way, or just industry scare-hype.

A Health Resources and Services Administration report sheds some statistical light on the subject by determining the following:

The report doesn't account for all the initiatives set in motion because it was revised as recently as 2013. Since then, the Affordable Care Act is in full swing and the Baby Boomers are retiring.

While the number of nurses under the age of 30 in the workforce has increased, the average age of the nursing population has also increased, from 42 to almost 45 years old. This means that current, fewer older nurses are retiring and the younger generation isn't taking the spots of those that do.

Now, about 55% of nurses are over the age 50, and pretty soon they'll want to retire and a plethora of hospital jobs will need to be filled.

Also, when the Health Resources and Services Administration compiled their stats, not all of our population had access to healthcare. With the Affordable Care Act, there is an influx of people coming into the system as many of our nurses are retiring. This leaves a gap of 50% to be filled by the upcoming generation, which is the primary cause of the current nursing shortage.

2. Nursing Schools are Short on Faculty

According to an AACN’s report, U.S. nursing schools turned away almost 80,000 qualified applicants from BSN and MSN programs due to a lack of faculty, clinical sites, classrooms, and budget. Almost two-thirds of the nursing schools reported that a faculty shortage was a main reason for not accepting more applicants into their program.

While there is a push to create a more educated nursing pool to fill needed jobs as they open, there aren't many nurses taking up the reigns as educators. A two-or-three year associate degree is a much more economical path to becoming an RN for struggling students than an advanced degree. Due to this, many students forego a BSN or MSN so they can get a foot in the door begin their careers. This means that the U.S. has entry level jobs being filled, but not many upper level positions-- and without teachers, we can't have more educated nurses.

It's really a horrible cycle that leaves out people who want to learn, and makes others, who want to get out (retire), stay.

3. Enrollment is Not Growing Fast Enough

Because of the number of nursing school faculty retiring and the many others working in the field, there aren't enough teachers to support the large number of applicants. And with many nurses without advanced nursing degrees, it cuts down on the number who are qualified to teach.

There was a reported 2.6% enrollment increase in entry-level baccalaureate programs in nursing in 2013. That number doesn't stack up to the projected demand for nursing services so, while we are seeing an increase in the number of students going on for a bachelor's or master's degrees, the influx of new patients into the healthcare industry by the Affordable Care Act are just too much for the U.S. infrastructure.

Unfortunately, the numbers don't even out. While we have many applicants wanting to become nurses, we don't have nurses getting the right education to further the nursing lineage. To play off an old idiom, we have too many Indians and not enough chiefs.

4. Turn Over Rates are Increasing

With all of these inefficiencies, we are running our current nurse workforce into the ground. Many find themselves overworked and increasingly stressed, leading to a higher turn over rates. Nursing is already stressful enough without all the added patients and demand. Imagine working 12 hour shifts and being told you have to work more days, take on more tasks, and give up much-needed time off. It would drive anyone to lose enthusiasm for their work and look for opportunities elsewhere.

Retiring Baby Boomers don't just mean a loss of nurses and teachers, it also means that we have a large segment of the population who are newly seeking healthcare services. According to a report released by the Nursing Institute at the University of Illinois College of Nursing, the ratio of caregivers to the elderly will decrease by 40% between 2010 and 2030. This will strain our current health system and increase the demand for nurses exponentially over time.

Many of these strains cause nurses to quit the field completely. The long hours, stress, demand, and work load is too much for many, so they quit. This creates more gaps that need to be filled, putting further strain on the healthcare system and having a cyclical effect, leading to even more gaps. It's a decaying system that will grow until the right changes are put in place to restructure and support the disconnections currently present.

To get a better grasp on the effect Baby Boomers are having on today's healthcare system, check out the following infographic provided by Maryville University:

What Does It All Mean?

In order to combat the nursing shortage, the gaps in the healthcare system must begin to narrow by training more highly-educated nurses and instructors. If you're searching for job security, these positions offer a broad range of opportunities now, and will continue to do so throughout your life. The full effect of the Affordable Care Act has not been realized yet and much of our current, older nurses are delaying retirement to shore up their finances and assist with the transition.

Apply to nursing school and give it all you've got, because now is the time to jump in and make yourself as valuable as possible-- not just valuable for jobs, but for the future of nursing.

You won't have to worry about any lack of demand. Recent reforms in healthcare have opened the doors for millions of people to access the healthcare system, inspiring explosive growth in the industry and higher demand for skilled professionals than ever before. Increasingly more nurses will be needed to support this growth throughout the coming years.

There are various complicating factors that make the future of the nursing market hard to forecast. The Affordable Care Act did a great thing for public health by providing expansive access to healthcare services. However, we can't sacrifice the people who take care of us in the name of widespread healthcare. If we do that, then everybody loses.